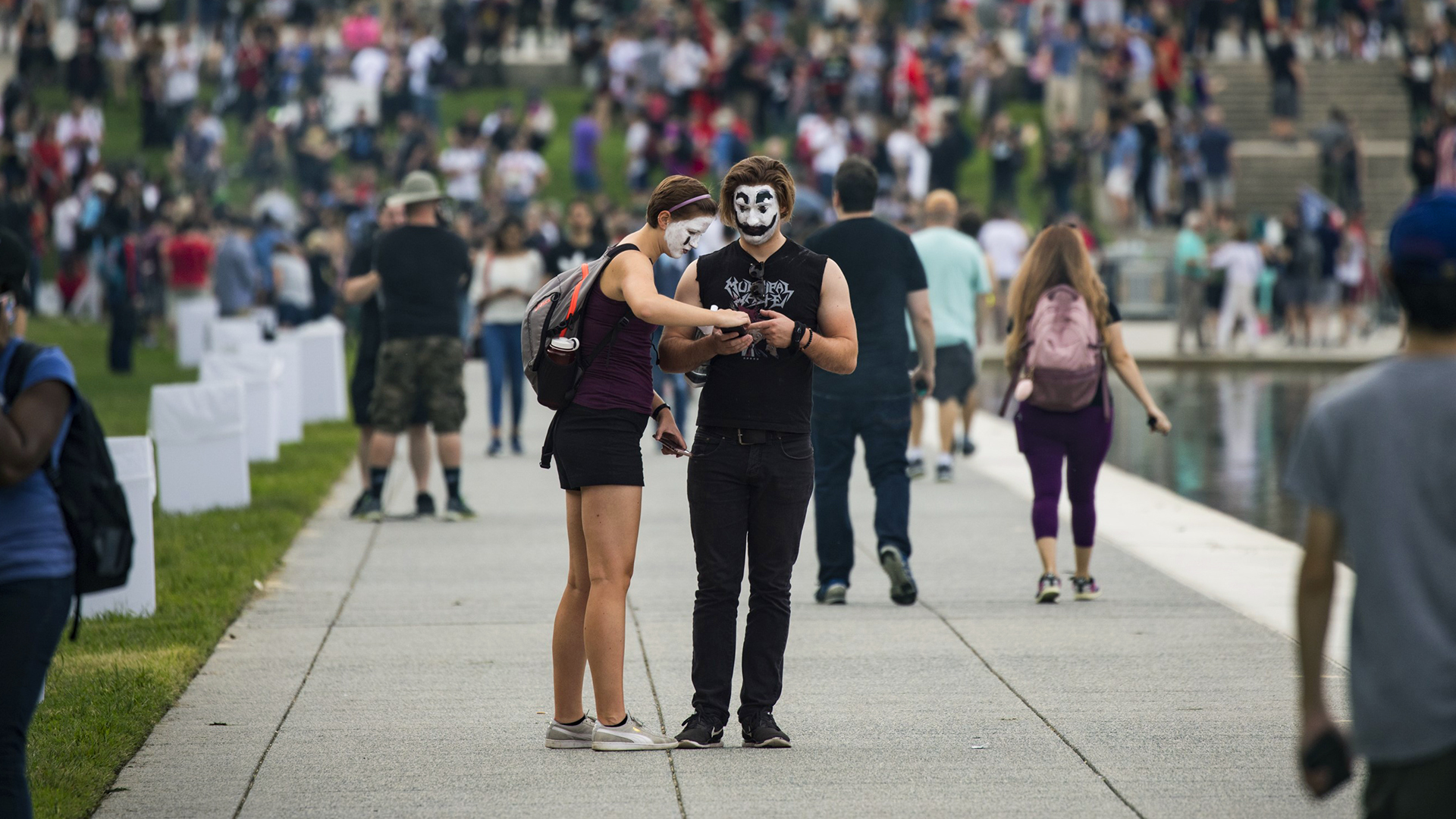 Whoop Whoop! Juggalo face paint has an anti-surveillance side

From police photographers to the risk of doxxing, facial recognition software is a threat at protests. Here, one activist writes about how a low key countermeasure inspired by the face painting fans of a musical group offers anonymity — for now

It’s 11am on an overcast morning in Berkeley in 2017, and I’m handing out cold bottles of Faygo soda at a protest, in between bouts of police swarming us to keep us unsteady. While the mood is a little tense, we’re doing our best to relieve it with some loud, cheerfully defiant music and sugary soft drinks. The anxiety dissipates somewhat when the crowd see our faces. Half of the crowd sport the signature clown makeup of Shaggy 2 Dope, the other half the markings of Violent J from the rap duo Insane Clown Posse.

The ICP was formed by Joey Utsler and Joseph Bruce in 1989. Over the next 30 years, the Detroit group’s horrorcore take on hip-hop music has attracted a loyal and obsessive tribe of followers known as the Juggalos.

I am attending a protest against white supremacy with Struggalo Circus, a group that seeks to bring Juggalos and radical activists together to provide help and medical care in the streets. We look a bit out of place among the activists and black-clad anarchists. But everyone smiles when they see us, welcoming us with a “whoop whoop,” the internationally recognized call of the Juggalo community.

I have volunteered as a medic at protests for over 10 years now. Sometimes, I mask my face, but not this time—instead, I’m wearing face paint. However, with bandanas considered intimidating for some and often banned from protests, many activists are looking at alternatives ways to make themselves anonymous to confuse ever expanding facial recognition systems.

Their tactics can be quite low tech, including pulling their hair over their face, using certain makeup techniques, or pointing lasers at cameras to avoid photos being taken.

But there is also a growing consensus that face paint like the clown make-up that Juggalos already wear may also disrupt facial recognition software.

The aesthetic of the ICP is a mix of comic book gore and theatrical vaudeville. In the three decades since the group was formed, the ICP has built a self-sustaining, lo-fi universe of musical festivals and album releases. Fans proudly imitate the dress and stage makeup of its founders. What is more, there is a growing consensus that face paint, such as the clown make-up worn by many Juggalos, may frustrate facial recognition software.

For many activists, anonymity is a matter of safety.

One Juggalo, who goes by the name Dimensions, said, “I wear my juggalo paint to protests, cause there’s always grips of cameras, people streaming videos to YouTube, police photographers collecting data—even counter protesters at some events looking to track you down, and dox you, or SWAT you. But when me and my Juggalo homies are mixed into a crowd at some kinda demonstration, it’s way hard to tell where or who any one of us is.”

One anarchist, named Von, added, “I cover my face at protests for two major reasons: To avoid doxxing (when your legal name, home address, and other information is publicly released online for the purpose of mass harassment) and other negative side effects of surveillance, and for the aesthetic. Doxxing is the biggest threat posed by surveillance. Being outed as an antifascist to employers can risk losing a job, and our personal safety can be put at risk if our personal data is made public.”

I know this to be a reasonable fear. I was doxxed several years ago for being a street medic at a Black Lives Matter protest, by people who would become widely known as the “alt-right”. My elderly grandmother was threatened over the telephone, my employer harassed, my home no longer felt safe. It made me reconsider my tendency to leave my face uncovered at activist events—not just for myself, but for the sake of those around me.

Use of sophisticated surveillance technology—particularly that which relies on artificial intelligence—is on the rise. On the West Coast of the United States, where I live, police have constantly been trying to improve their surveillance of citizens with increasing resistance from the public.

Globally, 64 countries are now using facial recognition surveillance, with much of the tech originating from either China or the United States. It’s not surprising, then, to see many protesters in Hong Kong using facial coverings, similar looking clothing, and their own tech in order to make recognition more difficult for authorities. In Chile, protesters used laser dazzlers to take down a drone that was tracking their movements. And none of this is new—Guy Fawkes masks, bandanas and balaclavas have long been used by protesters keen to protect their identities.

“I guess I’d say that some of the appeal of wearing ICP paint has always been the anonymity it provides,” Ape Boy, a Juggalo affiliated with Struggalo Circus, said. “A whole other name, face, or job, was already part of the game for us; whether for fun or privacy, obscuring Identity is a juggalo speciality!”

While many Juggalos would hesitate to class themselves as particularly politically inclined, they do understand what it’s like to be targeted simply because of who they are. In 2001, the FBI declared Juggalos a gang. Juggalos marched on Washington DC in 2017 to protest this designation, many in their trademark face paint. Despite the Bureau’s claim that there is no current gang list that includes the fandom,  local police forces states such as Virginia still treat Juggalos as gang members.

A 2012 project by the artist Adam Harvey, titled CV Dazzle, sparked interest in types of camouflage that bypass surveillance technology. It included makeup looks and hair styles that interrupt the lines of the face, making it harder for facial recognition systems to make a match.

Kelty Robinson, another artist working with facial recognition disrupting makeup designs, explained, “I discovered the use of blues, purples, and cubic shapes, especially around the eyes and T-zone … The best way to disguise yourself is to make the software think your facial structure is different than it actually is.”

But how can you tell if such measures actually work? Start with Facebook. “Take a photo of yourself and see if FB tries to auto-tag you, begin your makeup application, repeat until the photo does not ‘find a face’ to tag,” Robinson said.

Adam Harvey, meanwhile, continued his work with Stealth Wear, a line of clothing launched in 2013 and designed to protect wearers against drone surveillance. In 2017, he unveiled Hyperface, a pixelated printed scarf that presents surveillance systems with multiple false face images.

Does it really work?

Should Juggalo face paint be mentioned in the same breath as these projects? A Twitter posting from a computer science blogger known as @Tahkion in 2018 seemed to indicate that it is at least an effective strategy.

In a direct message sent via Twitter, Tahkion explained that they came to their conclusion while working on “a research project to see how hard it is to implement a nation-state-style mass surveillance system using freely available tools—the answer to that was [that it was] really not that hard, which is scary to me.”

So, how did that research lead Tahkion to Juggalo face paint? “I was honestly just making a lot of Juggalo related jokes at work one day and said, ‘I bet they break my facial recognition system,’” Tahkion said. “Juggalo makeup doesn’t just evade facial recognition, it evades it better than most of the things I’ve tested that were deliberately designed with that intention.”

“Most image systems use 2D rendering and heavily rely on color contrast. Juggalo makeup masks the lines of the facial features which facial recognition systems use,” Lemoine said. “If the system can’t find the borders of your mouth, nose and eyes, it can’t create the fingerprint it needs to check the database. It fixates on the paint lines instead and creates a fictional fingerprint. So it will find a face, but be unable to recognize which face it found.”

For Juggalos, the news was a welcome, if amusing, development.

“I first saw those tech magazines researching our paint and 3D scanning Juggalo craniums, then coming up with nothing but a glitch,” said a Juggalo by the name of RaiderLo. “I guess it ain’t come as too much of a surprise.”

The face paint method of facial recognition avoidance likely won’t work forever, though, Lemoine warned. “My suspicion is that adversarial techniques for disrupting facial recognition will become more sophisticated, as the technology is deployed more widely.”

Not just about facial recognition

Ultimately, Juggalos don’t seem to care much whether their face paint will protect them from surveillance. For them, it is more about identity and belonging.
“My reason for face covering at a protest or march might be different from other folks’ reasons for doing it,” said Ape Boy. “I do it partly to rep my people, and let them know Juggalos was out here when history was going down. It’s dope for morale when a group of clowns bail through whooping and passing out ice-cold Faygos for dehydrated protesters.”

“Anything you can do that obscures you from automated detection will pretty much also be obvious to anyone around you,” they said. “That’s a weak point for Juggalo makeup, unless of course you’re surrounded by Juggalos all the time and can wear it without standing out.” 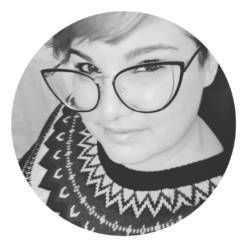 Kitty Stryker writes about activism and consent for Teen Vogue, Vice and a number of other publications. She is also the editor of "Ask: Building Consent Culture."