LGBTQ Crisis
Channel
Previous article 10m read
Fresh News and the Future of the Fourth Estate in Cambodia
Next article 5m read
As Concerns Over Technology Increase, a New Book Reminds Us the Internet is Made Up of Human Beings 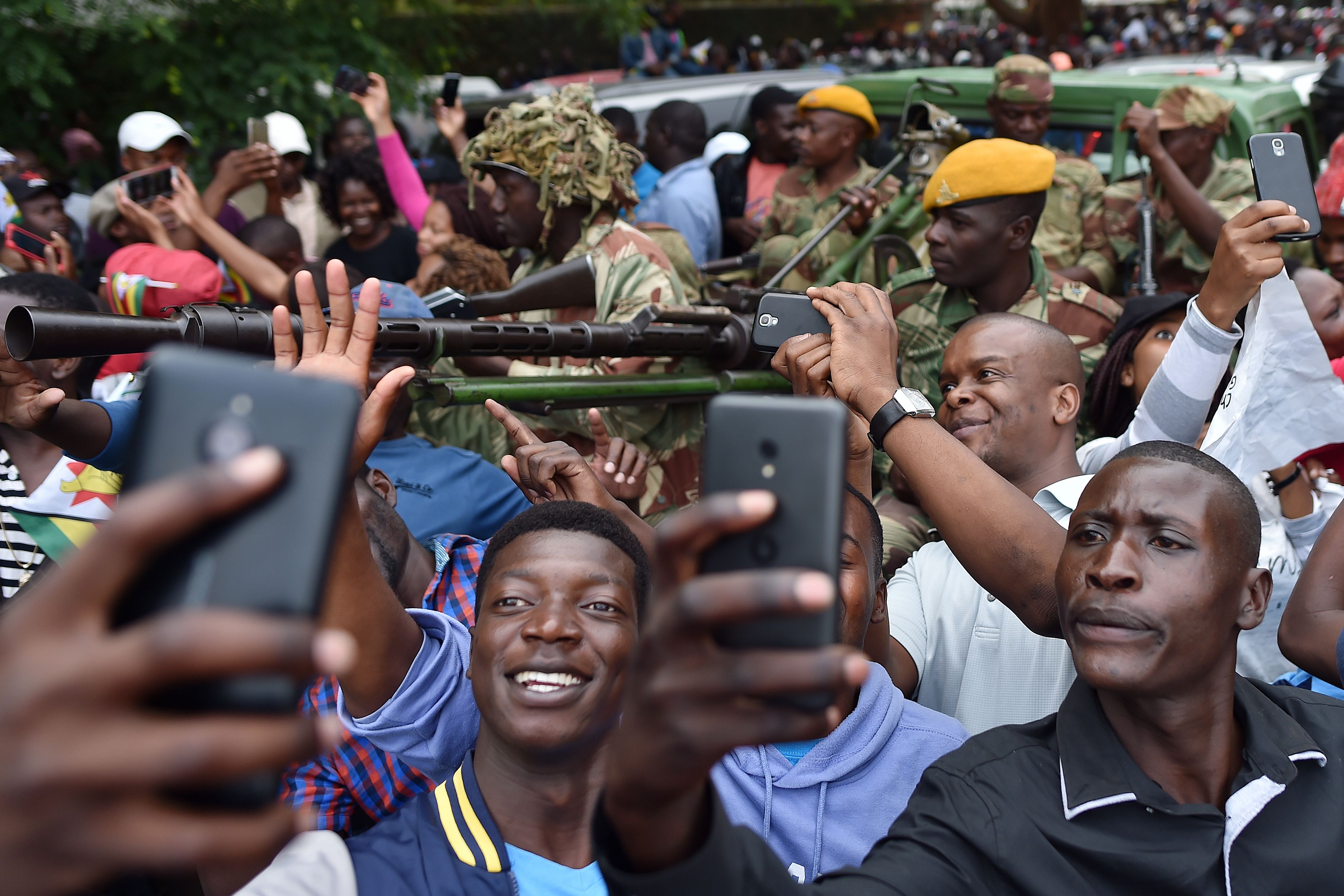 People take selfie-pictures with Zimbabwean Defence Force soldiers during a march in the streets of Harare, on November 18, 2017 to demand to the 93 year-old Zimbabwe’s president to step down. Zimbabwe’s president clings to office, the military is in power and the much-feared ZANU-PF party still rules — but Zimbabweans put such issues aside on November 18, 2017 to happily embrace what they hope is a new era for the country. / AFP PHOTO / STR (Photo credit should read STR/AFP/Getty Images)

One year after jubilant residents celebrated in the streets of Harare when Zimbabwe’s army removed Robert Mugabe from power, the country is in darkness. Last month, after days of protests over a doubling of fuel prices, security forces launched a crackdown in which 12 people were killed and 600 arrested. Zimbabwe’s government also ordered its first, countrywide internet shutdown.

The country’s largest mobile provider, Econet Wireless Zimbabwe, said it had suspended services following an order from the government. “We are obliged to act when directed to do so and the matter is beyond our control,” said the company in a text message to customers. In a Facebook post, Strive Masiyiwa, an exiled Zimbabwean billionaire who made his fortune after setting up Econet Wireless in 1999, said that “acts of government” had forced the company to switch off internet connectivity. He added that he was informed “non-compliance would result in imprisonment of our managers on the ground for three years.”

Zimbabwe’s assault on the internet is the government’s latest attempt to impose its will on ordinary Zimbabweans, observers and activists fear. A year ago, incoming president Emmerson Mnangagwa promised the start of a “new democracy” and an end to the country’s political divisions. In a piece published in the New York Times, Mnangagwa vowed to transform Zimbabwe into a country with a “thriving and open economy, jobs for its youth, opportunities for investors, and democracy and equal rights for all.”

In the year since the ouster of Mugabe—who once proclaimed “only God will remove me”—Zimbabwe’s economic problems have worsened as the country wrestles with vast debts, a battered infrastructure, soaring food prices, hyperinflation and unemployment.

Having failed to bring prosperity, Zimbabwe’s government now seems determined to establish dominion over all aspects of its digital and public spaces. As it enlists foreign firms from China and Japan to help build a surveillance state, activists and researchers are worried that what lies ahead could be worse than the Mugabe era.

“Shutting down the internet has become a go-to tactic. Robert Mugabe, who was rightly reviled for the human rights abuses, did not go so far as to order a blackout. The (new) government has shown zero political will to protect rights,” said Jeffrey Smith a founding director of Vanguard Africa, a foundation advocating for open democracy, with a special interest on Zimbabwe.

The recent internet shutdown may be a harbinger of human rights abuses to come, said Zimbabwean lawyer, Arthur Gwagwa, who is a cyber threat modelling expert and Open Technology Fund Fellow at Strathmore University Law School. “Arrests, torture and beatings were perpetrated under the shadow of the shutdown, so people are fearful,” he said. “They are resigned to the militarized state, mentally preparing for it.”

Zimbabwe’s control of online and offline spaces rests largely on foreign suppliers, who have provided the government with a host of new cyber-control tools. Last November, Japan’s ambassador to Zimbabwe, Toshiyuki Iwado, delivered a grant for $3.6 million of cybersecurity equipment to Zimbabwe’s finance minister Mthuli Ncube. According to the Japanese Embassy in Zimbabwe, the grant was part of Japan’s “Grant Aid Project for Cybercrime Equipment Supply.”

Zimbabwe’s minister of communication technologies was more forthcoming about what the tech will be used for. Police will deploy it to boost digital forensics and facial recognition systems, and introduce a new data sharing platform, said Kazembe Kazembe. The technology would also allow the government to tap electronic communications to prevent crime and animal smuggling into Zimbabwe.

But technology experts worry that Japan’s grant may inadvertently help the government crack down on dissent.

“Although Japan has not been Zimbabwe’s ally in repressing its people, Japan may not be able to control the nefarious objectives towards which its technology may be employed,” said Gwagwa. He added, “[P]ro-democracy activists, in the eyes of the government may be classified as part of the smugglers and wildlife.”

The Japanese contract is part of a wave of imported surveillance tech. Another is China’s recent involvement in building a national artificial intelligence facial recognition database. According to a report in China’s Global Times, CloudWalk Technology, a Guangzhou-based startup signed a deal with Zimbabwe last year to provide facial recognition software for public use throughout the country.

The agreement is part of “Belt and Road,” a Chinese soft-power initiative and will extend to building infrastructure like airports, railways and bus stations as well as smart financial systems. China has traditionally been a close ally of Zimbabwe and is the single biggest financial investor in the country’s beleaguered economy. China has invested billions in diamond and platinum mines, new highways and electricity-generating dams.

The deal potentially means Zimbabwe is one of the first countries in the region to adopt this kind of technology. CloudWalk uses 3D light facial software, which is better than traditional facial recognition at reading dark-skinned faces. Crucially, the deal will let CloudWalk train its algorithms on data taken from Zimbabwean citizens. The resulting information will help China build one of the world’s most comprehensive and racially-diversified facial recognition databases.

This has activists worried. Essentially, Zimbabwe may be giving away large amounts of private data on Zimbabwean citizens to an unaccountable overseas tech giant.

“(These deals) allow Beijing to use developing countries as laboratories to improve its surveillance technologies,” said Gwagwa.

This is part of a larger pattern. For China, exports of AI technology have multiple purposes, said Gwagwa. “It is win-win diplomacy—Chinese AI companies get to train their algorithms on darker-complexioned Africans while collecting and retaining DNA, while at the same time setting up data centres to spur digital trade and aid conventional economic transactions.”

CloudWalk officials did not respond to Coda requests for an interview, though it told the Global Times that, “The Zimbabwean government did not come to Guangzhou purely for AI or facial ID technology, rather it had a comprehensive package plan for such areas as infrastructure, technology and biology.”

Chinese companies have also signed similar deals have in Angola and Ethiopia.

Another Chinese deal involves the Zimbabwe Republic Police, which has jumped onto the authoritarian technology bandwagon and is due to introduce powerful night vision surveillance cameras across Harare. Drivers will be asked to install dashboard mounted cameras and upload videos of driving infractions to a Dropbox folder. According to police, the goal is to curb driving violations and crime. The Dropbox captures the names and email addresses of motorists and citizens who upload any footage.

A Chinese company, Hikvision, will provide the police with high-tech surveillance cameras. Hikvision is closely involved with large-scale surveillance projects across Xinjiang, where the Chinese government is persecuting Uighur Muslims. One project won by Hikvision in Urumqi is worth $79 million and incorporates some 30,000 security cameras. Hikvision’s projects also utilise video analytics hubs, big data centers, police checkpoints and drones.

Harare City Council have also separately spent $2 million installing Hikvision surveillance cameras at traffic lights across the city. “The cameras will help identify traffic offenders, especially those who impede the smooth flow of traffic” said the city’s chief engineer of works George Munyonga. The cameras will monitor all roads and parking spaces within the central business district. Installation of the network is 70 percent complete.

Tefo Mohapi, the founder and chief executive of iAfrikan, a digital-tech hub based in Johannesburg, is concerned about Zimbabwe’s increasing reliance on surveillance systems created in China.

“There are many possible negative concerns, especially regarding a government like Zimbabwe’s which has demonstrated it can use any means to infringe on citizens’ rights,” he said. “One of those is of restricting the movement of people deemed not to be towing the line and opposing the state.”

The commander of Zimbabwe’s defence forces has long been enthusiastic about such technology.

“As an army, at our institutions of training, we are training our officers to be able to deal with this new threat we call cyber warfare where weapons [are] not necessarily guns but basically information and communication technology,” said Valerio Sibanda.

At other times, the army has used internet access to its advantage. Crucially, during the coup, the army allowed unfettered access to the web to ensure global acceptance of the army’s narrative as it seized power.

“Rather than cut access to the web, the military allowed a free flow of online information; carefully crafted discourses and opinions,” said Gwagwa. “It used soft power and allowed citizens freedom of social media as a grand strategy to allow a fast-pace exchange of information. This was key to ensure local and global acceptance of the coup.”

Gwagwa compares the army’s strategy with the example of Turkey, where President Recep Erdogan used Facetime to build resistance to an attempted coup in 2016.

“Authority led-information manipulation is highly dynamic when digital information has high value. In Zimbabwe the army carefully co-opted the masses through a choreographed scheme,” Gwagwa said. “The public easily bought into the narrative.”

More worryingly, he thinks the army successful manipulation of digital technology to suit its goal of portraying an “open and peaceful” transfer of power could be widely copied across Africa.

Locally, however, Zimbabwe’s government continues to tighten its hold over the internet. And it may have recently received the best defence of its push to increase surveillance. On 21 January, an anonymous band of hackers calling itself “Anonymous” claimed to have struck down 70 government websites like justice, central bank, and water ministries in a DDoS (denial of service) attack. The hacker claimed that they were motivated by Zimbabwe’s political unrest, rather than money. “Your banking is next,” warned the hackers. 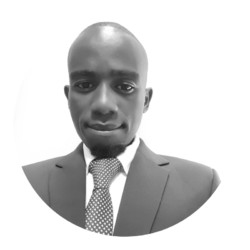 Ray Mwareya is a journalist and fellow of the ZKM.de Global Exhibition on digital surveillance. His work has been published in The Guardian, Reuters and the Financial Times.