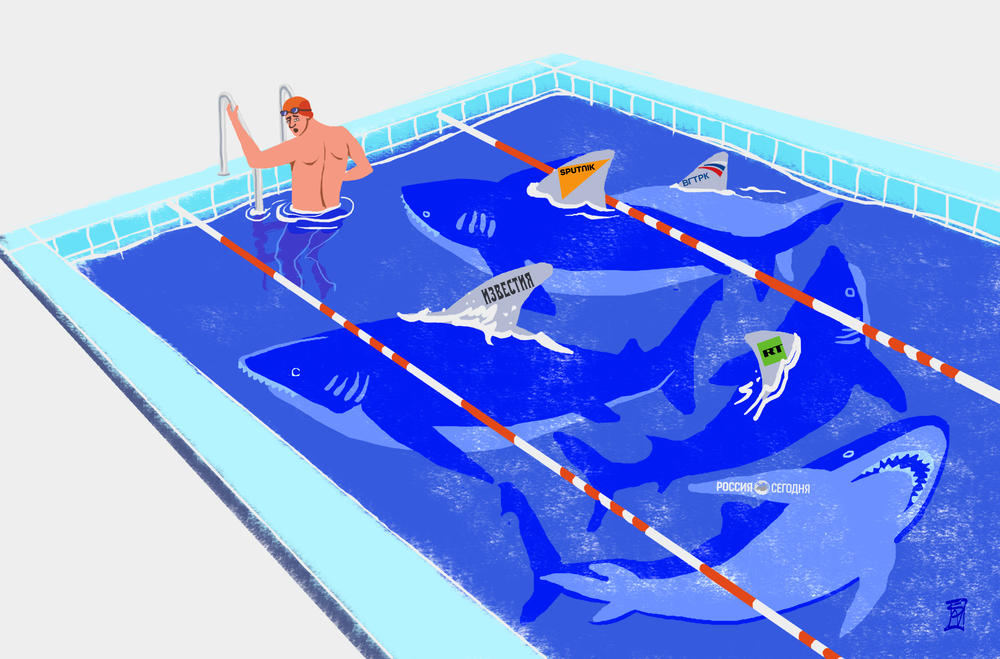 After working for Kremlin TV, a Russian reporter explains how the state turns journalists into propagandists

Dmitry Kiselyov entered our newsroom wearing an elegant suit and a victorious smile. Three days earlier, on December 9, 2013, President Vladimir Putin had signed a decree dramatically reorganizing Russia’s media landscape. Kiselyov, the man whom Western media has labelled the Kremlin’s “chief propagandist,” was about to become my new boss at RIA Novosti.

For years, RIA Novosti had been one of the most unusual media organizations in Russia: a state-run agency with an excellent reputation for balanced and fair reporting. Putin’s decree meant that RIA would be absorbed by a new organization called Rossiya Segodnya (Russia Today). If the English-language RT was meant to bring the official Russian point of view to the West, “Rossiya Segodnya” would focus on domestic audiences. Kiselyov was appointed as its CEO.

Standing in the middle of the newsroom, Kiselyov delivered his vision of the future: “We are supported by the presidential administration and by the government. You know, there is freedom of speech in our country. But the period of impartial journalism is over. Objectivity is a myth that we have been offered; it has been imposed on us. I myself used to abide by these principles, but I went through an internal evolution,” he said.

I quit RIA Novosti a month or so later, and then spent several weeks searching for a new job. Finally, a local TV channel, controlled by the Moscow city government, offered me a reporter’s position. Nothing else was available. During the interview, I made it clear that I would not want to cover any political issues and my editors respected my wish. But I was kidding myself by thinking I could avoid being swallowed up by the propaganda machine.

Once a week, usually on Fridays, all key editors of all the government media-platforms would gather at the Kremlin for an “editorial meeting.” These were mostly led by Putin’s press secretary, Dmitry Peskov. A few hours later, a real editorial meeting would take place in the newsroom and, based on the Kremlin meeting, a team of top producers would discuss the upcoming coverage — what issues it would raise and what guests would appear on the evening talk-show.

I tried to sneak out of these editorial meetings. I knew they were a waste of time. I’d say I was too busy working on a report or hide in a beer bar near the office. But once in awhile, I would fail to escape. I remember one meeting that took place shortly after Russia annexed Crimea in 2014. “There is no more time for truth-seeking,” we were told. “Our country,” one of the top editors said, “is back in the Cold War era.”

I focused on reporting issues as far removed from politics as possible. I did stories about how the Moscow authorities built a new metro line, about bad road conditions or the city’s extraordinary traffic jams. On that level, there was no censorship. Sometimes, it even felt like I was doing real journalism. A story I did on criminal realtor schemes helped a family get their apartment back.

But I constantly appeared on the same screen with people who could not be called journalists. And for the most part, I felt ashamed. I never talked about my job with my girlfriend, parents and friends.

Pinned to the wall of our central newsroom was a sheet of paper with the words “Crimea: not ‘annexation,’ but ‘reunification.’” These were the terms TV anchors and reporters were told to use while covering the Crimean annexation. From our studios, we were teaching the entire country a whole new vocabulary: “junta” (the Ukrainian government), “butchers” (the Ukrainian army), the “fifth column” (the Russian opposition).

None of these words were used in private conversations in the newsroom, but, still, working there felt like swimming in a shark tank. We never socialized with each other after work. In fact, we didn’t even talk much. But I had good relations with my colleagues from other TV channels. Like me, they were putting distance between the work they did and their personal identities. We used an old Soviet term, “internal immigration,” to describe this state of mind.

One of these so-called “immigrants” was Andrei. He described himself as a moderate liberal. In Russia, that means someone who doesn’t like what the government is doing and tries to oppose it, but who also thinks that, as a whole, the political system is fine.

Pinned to the wall of our central newsroom was a sheet of paper with the words “Crimea: not ‘annexation,’ but ‘reunification.’” These were the terms TV anchors and reporters were told to use while covering the Crimean annexation.

Andrei and I often met up until, one day, he left to report on the war in eastern Ukraine. It was the height of the conflict, and Andrei was embedded with the Russian-backed separatists. When he returned, I noticed that he had changed. Even in a private conversation, his language was now full of the new jargon of Russian state TV.

Idealistically, perhaps, I tried to argue with him. I wanted him to acknowledge the other side, but Andrei had made up his mind. He told me that, at first, he had tried to report “objective” news, but then he realized that there was no truth in Ukraine. “One side is shelling you and the other is protecting you. You get angrier and angrier, day by day. So, you have to pick a side.” My counter-arguments had no effect.

During that period, the professional and personal worlds of many in Russia collided. Not all of these collisions related to the war in Ukraine.

In the summer of 2014, the Moscow authorities decided to fix the city’s horrific traffic problems. Among the changes was a new fee for parking. Muscovites, at least those with cars, were outraged, but my colleagues and I had to cover it in a positive way.

Our building didn’t have its own parking lot, so all employees who had their own cars now had to pay to park on the street. My colleague, Anna, who was assigned to cover the issue, tried hard to hide her own car from the traffic inspectors. Sometimes, when she parked it on the street, she would remove her licence plate so that the inspectors couldn’t give her a ticket. But on TV, she made a U-turn. She took the mayor’s position, argued that the change was good and never interviewed people angry about the new regulations. In fact, it was impossible to find “real people” who were for the reform. And so, state-run companies were told to provide us with an employee or two who would pretend to be local residents.

“There is no more time for truth-seeking,” we were told at an editorial meeting shortly after Russia annexed Crimea in 2014.

I think most of us journalists — if I were to guess, maybe about 60 percent of us — wanted to quit. Some, perhaps 25 percent, didn’t give a damn, and the rest actually believed they were doing the right thing.

I quit the station seven months into the job. But who was I to judge those who stayed? Some of these people joined the channel in the early 2000s, when you could speak out on TV and have meaningful debates. Slowly, over the years, compromises, one by one, crept into their lives. By early 2010, these editors and reporters had kids and mortgages and quitting wasn’t an option. The Kremlin’s disinformation campaign depends on such journalists. Not on people who want to change the world order. But rather, on those who hope that their friends and relatives don’t see them on TV.

Alexei, one of my former colleagues, is a case in point. We both started out as reporters, often covering press-conferences and events. But Alexei rose fast through the ranks of the station, becoming the head of a department.

We went out drinking on a recent Friday night at a packed, loud bar in Moscow’s city center. Swinging back whiskeys Alexei told me he had had a tough week at work, much of which was taken up by a particularly stressful interview with Russia’s minister of sport. It always takes a lot of time and effort to make a program which, on one hand, is worth watching and, on the other, does not ask any tough questions.

Alexei’s career at Russian state TV has been a success, but he has his exit plan ready. Recently he moved his wife and two young daughters to Vietnam, where they live in a cottage by the beach. In a year or two he hopes to join them there, open a small hotel and “forget all the things I am covering now.”

The names of all reporters in the piece have been changed.