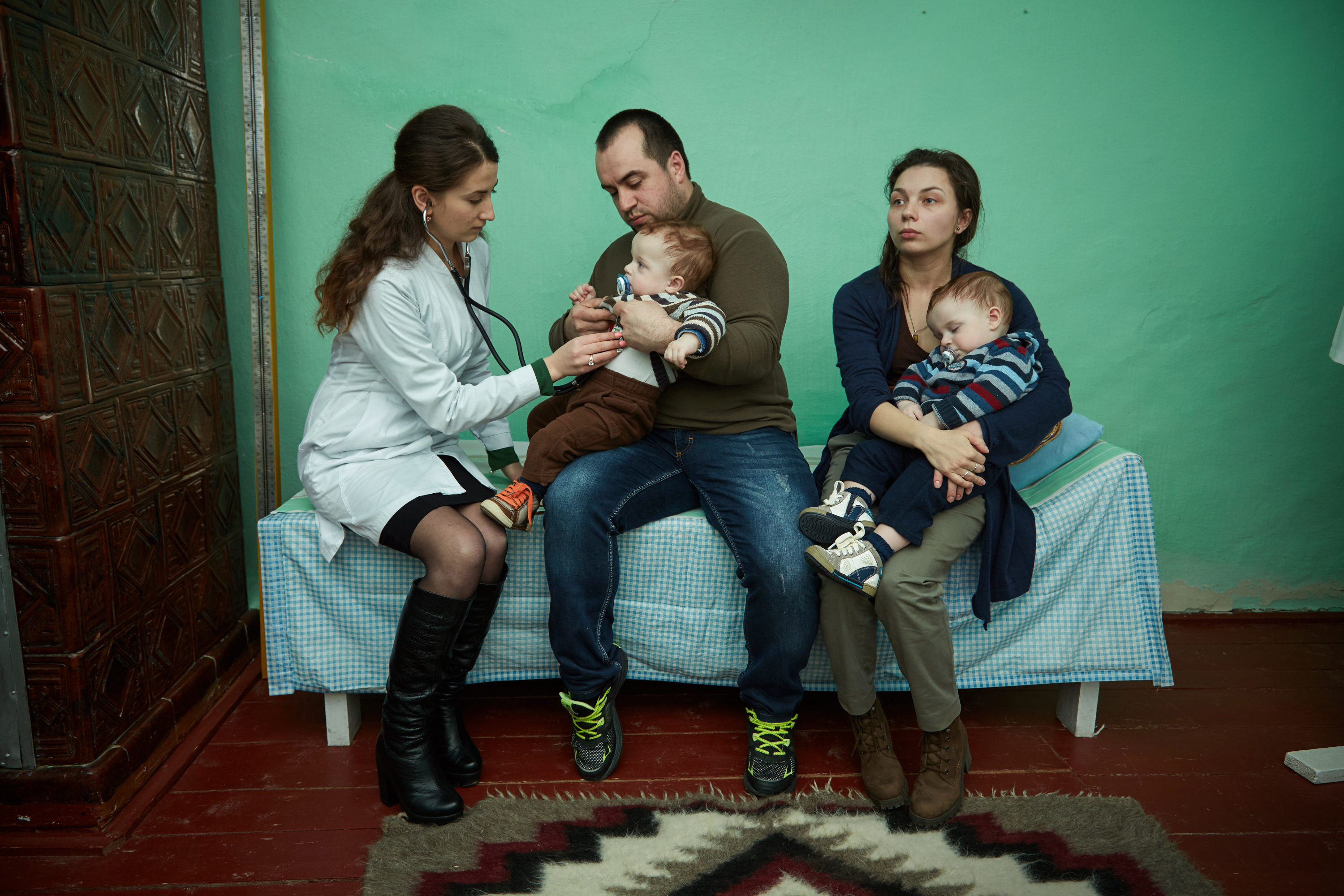 Infectious diseases like measles are making a global comeback. Hardest hit is Ukraine, which has seen the fastest recent rise in measles in the world﻿

Kyiv resident Julia Buchak is a conscientious parent to her two daughters, Sofia, eight, and Zoryana, three. Part of her responsible parenting, she believes, is to decide not to vaccinate them.

“Everyone has a right to their own philosophy,” she says of her decision.

International organizations and governments responsible for public health would disagree. Because of falling vaccination rates, infectious diseases like measles are making a global come-back. Ukraine is one of the hardest hit countries, with the fastest recent rise in measles in the world — more than 115,000 cases and 40 deaths since an outbreak started in 2017.

The acting Ukrainian health minister described the crisis as a national security threat. The World Health Organization has identified “vaccine hesitancy” as one of the world’s top ten health threats for 2019. And the U.N. children’s fund UNICEF has named misinformation, mistrust and complacency as the “the real infection” behind the re-emergence of preventable diseases.

The conflict between state health programming and misinformation that fuels vaccine hesitancy is not unique to Ukraine. But Ukraine is in the midst of another war over its geopolitical and ideological position between Russia and the West. With Western-backed health reforms introduced by a U.S.-born health minister, vaccines and measles play into that larger conflict.

Shortages of vaccines and of trust

Instability, corruption and complacency have all led to gaps in vaccine availability and coverage in Ukraine. Infectious diseases like measles need a vaccination rate of 95% or above for ‘herd immunity’ to limit their spread. After mass programs were introduced in the USSR in the 1960s, measles was limited to small outbreaks. Most people in Ukraine forgot the disease could have potentially fatal consequences.

Official statistics show national coverage of the MMR (measles, mumps and rubella) shot began falling from the late 2000s after vaccine shortages in 2008 and 2014-16. By 2016, just 45% of children had had the MMR jab, a vaccine against measles, mumps, and rubella.

Lack of availability was accompanied by declining trust. Many trace the lack of confidence back to the 1980s. That’s when a Russian “professor” (according to Russian Wikipedia, she does not have any medical certification) began campaigning against vaccination. She became the guru of Russian-language anti-vaxxers, still referenced by some who oppose vaccines in Ukraine.

By 2019, a global study on attitudes to health and science by the Wellcome Trust found that just 29% of Ukrainians think vaccines are safe, and half think they are effective (in Russia the figures are 45 and 62%).

Julia, 35, began doubting vaccines when she was expecting her first child, Sofia. The views of her yoga teacher and of a relative amplified her opposition. Julia has never doubted her decision not to vaccinate. Her second child Zoryana was born at home, outside the state health system altogether.

I meet Julia and her daughters in a fashionable vegetarian cafe in Kyiv. “I brought the children, so you can see they are alive and healthy despite being unvaccinated,” Julia says, cheerfully.

Four points led Julia from doubt to certainty: questions about the source and quality of vaccines; the ineffectiveness of the tuberculosis vaccine in Ukraine; pressure put on post-natal women to vaccinate with no proper explanation, and her discovery (not confirmed by medical tests) that Sofia has contra-indications in the form of allergies to vaccination. “I think it all happened as it was meant to happen,” she says.

Some of Julia’s doubts can be easily resolved. Vaccines currently used in Ukraine are produced in Belgium and procured by UNICEF. The TB vaccine, developed almost a century ago, is indeed only partially effective, but those for other diseases such as measles which were developed much later have up to 97% effectiveness.

However, many overworked and underpaid medical staff in Ukraine do not discuss such doubts with patients. “Most of them just want to get people out of the clinic, so they can get more people in,” says Lotta Sylwander, UNICEF’s Ukraine representative.

Julia found that medical staff followed up with daily calls after Sofia was born – but only to insist on vaccination. “It’s all scare tactics,” she says. “If a nurse hasn’t persuaded you to vaccinate then she hasn’t done her job.”

To guarantee herd immunity, and protect those few whose medical conditions prohibit vaccination, MMR and other vaccinations are mandatory in Ukraine, as in many countries. Children should have a certificate showing they are vaccinated in order to attend school. In practice, many parents buy fake certificates from doctors.

Julia’s first source for vaccine and health information is the internet. She seeks information that fits her worldview, which values self-sufficiency, nature and a holistic approach to health.

Globally, doubt in science-based, state public health programs is fed by exposure to an apparently unlimited amount of information which can confirm or disprove every bias. Julia admits that the information is overwhelming, and her attitude to vaccines is often, in the end, based on intuition.

“It’s more on an energetic, deeper, even spiritual level,” she says.

The current measles outbreak has claimed 40 lives in Ukraine since 2017 — deaths which could have been prevented. Accurate information, and national statistics, are widely available. But Julia is not convinced by statistics.

“If the government gets vaccines then it needs to use them, and so the few cases [of measles] are exaggerated to a level of national importance,” she says. “It’s all marketing and information wars.”

Mistrust in governments, health systems and big business informs vaccine hesitancy everywhere. In Ukraine it’s exacerbated by almost three decades of social, political and economic upheaval. Many Ukrainians feel that the only thing they can rely on is themselves.

“How can I rely on the government that is changing its position and direction all the time?” says Julia. “Why is the government responsible for my kids? Really, it is not. It pretends to be but actually it doesn’t help.”

Yuri, 35, a Kyiv shop owner, and his wife have decided not to vaccinate their ten-month-old child. Yuri says he doesn’t trust any governments or international health organizations which “hide a lot from us,” he says. “It’s profitable for them to keep people stupid, because they’re easier to control. It’s not just vaccines, it’s our whole lives.”

In Ukraine it’s not only people like Yuri who see government conspiracies. When I asked the then acting Ukrainian health minister, Ulana Suprun, what was the key reason for the measles outbreak she had a simple answer: Russia, through its propaganda spreading false vaccine information, and its domestically-produced vaccines which were used in Ukraine in the 1980s, and which she says were ineffective.

A vocally patriotic diaspora Ukrainian, who started her career in Kyiv supplying medical kits to the army when war broke out with Russian-backed separatists in east Ukraine in 2014, Suprun claimed that “Ukraine is facing the primary assault from Russia’s comprehensive hybrid war including in the field of healthcare,” in a speech to the UN last year. She stepped down as acting minister in late August.

Suprun, along with much Western media, cited research which found that Russian trolls and bots may help spread anti-vax messages online. However, the study analyzed only English-language Twitter, and its findings are far from conclusive.

Media and social media coverage of measles and vaccination in Ukraine does relate to the Russian-Ukrainian information war, however. As Suprun has blamed Russia, Russia and its proxy separatist ‘republics’ in east Ukraine blame America, in the person of Suprun (who has an American passport) and her Western-backed medical reforms. Suprun and her shake-up of the corrupt, inefficient health system is controversial in Ukraine — her opponents call her ‘Doctor Death’. Russian media outlets, widely read or watched in Ukraine, repeat and amplify attacks on the reforms, feeding distrust of state healthcare. They use the measles outbreak to bolster propaganda that the Ukrainian state is a Western puppet.

Passive victims of the information war

Yuri, the shop owner, is an extreme anti-vaccine conspiracy theorist — during our conversation he tells me that many of the laws of physics are wrong. He chats to locals in his shop next to a playground in a Kyiv suburb, where he sells ecologically friendly food, cosmetics and cleaning products. Many customers are parents, and the subject of vaccination often comes up. One mother told me about such a conversation. “When I said I had just vaccinated my son for measles, the atmosphere changed; it was as if the temperature dropped several degrees,” she said. “I had to slowly retreat towards the exit. Really parents are divided into two camps, and it’s a war.”

According to Lotta Sylwander, UNICEF’s Ukraine representative, committed opponents to vaccination like Yuri are the exception in Ukraine. “It’s not anti, it’s more a passive kind of not understanding” that drives vaccine hesitancy, she says. The issue for the health system is how to reach these people and convince them.

Tatiana Kulakova, 40, would be a prime target for positive vaccine messaging. Her daughter Maria, eight, has never had any jabs. She has had several serious health problems, but according to doctors there is no current reason why she cannot be vaccinated. But Tatiana, who gave birth to Maria several weeks prematurely after having two miscarriages, is too worried to go ahead.

“It’s scary to live without vaccination, but what about the consequences?” she says. “It’s not clear how my child will react.”

Tatiana bought a fake certificate — at the suggestion of staff in her local clinic, she says –— so that Maria could attend kindergarten. For school she has another certificate saying she has refused to vaccinate her daughter. In fact, she hasn’t refused, she just hasn’t been able to bring herself to agree, or found anyone she trusts enough to allay her fears.

Clinics in Ukraine display vaccine information posters, and the health ministry has started vaccine drives to reach parents and children through schools. It plans to stamp out the practice of fake certificates, and a recent court ruling confirms that schools have the right to turn away unvaccinated children. Meanwhile MMR coverage among children aged one is now 91 percent, and annual UNICEF research shows 88 percent of mothers of young children feel positive towards vaccinating in 2019, compared to 28 percent in 2008.

Yet measles infection rates are still rising, at over 100 new cases a week. All the parents I spoke to in Kyiv thought that a large percentage of pupils in their children’s schools had not been vaccinated. And none of them who had not vaccinated, including Tatiana, could be persuaded to change or make up their minds.

“I just can’t come to a decision,” Tatiana says. “I understand that I need to do vaccination. But on the other hand, no one can properly tell me whether I should do it or not.”

Lily Hyde is a British writer, journalist and editor specializing in Eastern Europe and the former Soviet Union. She lives in Kyiv and has written for The Guardian, The Times, Foreign Policy and Politico. She has written extensively on Crimea and the war in east Ukraine.